It’s clear in this age of tech that electricity and its reliable supply are extremely important to nearly everyone in the USA. Our reliance on electricity has grown to affect how we live and work. From heating and cooling to communication and now powering some of our cars, the electrical grid is required for several aspects of life.

Dependency on the Electrical Grid

The numbers help paint the picture of our reliance on utility power. In 2021, electricity consumption in the United States was about 3.9 trillion kilowatthours (eia.gov). To put that massive number into perspective, it takes 1,000 watts to run a microwave for 1 hour. It’s no wonder than that it’s estimated that there is over 3,300 electric utility companies operating in the United States with around 200 of them providing power to the majority of users. The U.S. power grid connects about 2.5 million miles of feeder lines and over 450,000 miles of high-voltage transmission lines. (Statista.com)

Despite climbing demand for energy as population grows and economic activity increases, technological improvements in efficiency and new appliance standards have led to a stabilizing of electricity consumption. The residential sector has the highest energy consumption, followed by the commercial sector. Even more specific, equipment used for heating and cooling account for some of the largest shares of residential electricity end use. (Statista.com)

When there’s an outage that prevents even a small percentage of this electricity consumption from occurring, there can be big impacts. On a small scale a power outage may disrupt communications, water and transportation, close retail businesses, grocery stores, gas stations, ATMs, banks and other services and cause food spoilage and water contamination. (ready.gov) Commercially power failures bring production lines to an abrupt halt. This may translate into loss of material, breakdown of machinery, and loss of productive time. This may also cause supply chains to shut down altogether. (ishn.com) Additionally, power outages close schools, shut down businesses and impede emergency services, costing the economy billions of dollars and disrupting the lives of millions of Americans. (energy.gov)

And in the worst-case scenario – what would happen if the power grid shut down completely? If the power grid goes down, water and natural gas will also likely fail at some point, thus impacting other utilities that are critical to the health and safety of the public. Without a plan in place, most of us would be in bad shape with an extended grid outage. (energy.gov)

Despite our clearly critical reliance on the electrical grid, power outages have increased. 2020 was a record-breaking year for power outages in the United States, according to an Energy Information Administration (EIA) analysis published. (theverge.com)

While there is a variety of potential interferences with electrical lines and other infrastructure, in the United States, 96% percent of power outages in 2020 were caused by severe weather or natural disasters. (apmresearchlab.org) Without these extreme events, outages caused by small interferences (like wildlife and brush) would have stayed roughly flat at about two hours a year since 2013. 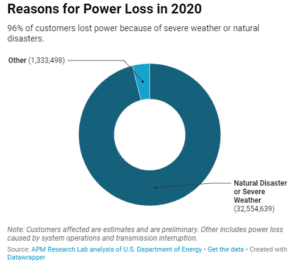 Unfortunately, since weather is the main culprit, it should be of no surprise that outages are increasing as climate change progresses. According to an analysis by Climate Central, there was 67% increase in major power outages from weather-related events between 2000 and 2019 nationally. Extreme weather is leaving Americans in the dark for longer than it has in the past, a problem that is bound to get worse as climate change fuels even more violent weather. (theverge.com)

On average, a person in the US went over eight hours without electricity in 2020. That’s more than twice as long the average American went without power in 2013, the year that the EIA started keeping track. Across the US, outage times varied considerably.

Weather’s Impact on the Electrical Grid

How exactly does weather impact the electrical grid? Severe weather and natural disasters come in different forms, each with its own particular method of exposing weaknesses in electrical systems. apmresearchlab.org reports that three of those major influences—heat, cold and severe storms—are impacting cities in the South and Southwest and have the potential to only do more damage in the future.

Heat can overpower electrical lines and make power plants inefficient. Drought, which is more probable with a heat wave, can lower water levels and limit the ability of hydroelectric dams to generate electricity. In order to combat the rising temperatures, people turn up their air conditioning, stressing the system further.

Cold temperatures, caused by a winter storm, created electrical supply and demand problems in February of 2021 in Texas. Temperatures reached record below-zero lows in some cities and 4.5 million customers across the state were left without power. According to an investigation by Buzzfeed News, the storm and resulting power losses likely killed approximately 700 people. Power plants across the state were caught off guard by the extreme winter conditions—parts failed, pipes froze, and entire facilities went offline.

Hurricanes remain one of the greatest threats to electrical grids. High winds can damage infrastructure and materials by breaking poles and tear down power lines while flooding can drown electrical equipment. And major storms keep coming, continually having devastating effects on electrical grids.

Hurricane Sandy was a massive hurricane that impacted 24 American states in 2012. Some people affected by the storm even had to go without power for 2 weeks. The damage to New York alone was estimated at $18 billion of the total $17.4 Billion in damages to the rest of the United States.

Research published in Nature Climate Change last year found that climate and weather events can also compound and create a much bigger effect than they would have otherwise. In August of 2021, dozens of people died when Hurricane Ida hit the Louisiana coast, many in the days following the storm when power lines were down, and temperatures rose above 90 degrees. In terms of weather threats, heat is the number 1 killer. To have high heat with no electricity to combat it is devastating.

What is the Solution?

What can be done to moderate the frequency and duration of electrical outages? The first step would be to address infrastructure since compromised parts of the grid are likely to fail for a multitude of reasons – weather, over capacity, brush and other small interferences. Upgrading the United State’s electrical infrastructure will enable the grid to better withstand these interferences.

But even after fortifying our electrical infrastructure, weather will continue to be a threat, especially as extreme weather events occur more often and increase in strength. Power companies must have access to the fastest most accurate weather data in order to see incoming severe weather as soon as possible and have the confidence to make planning and preparation decisions. Millions of dollars can potentially be saved when power utility and electrical grid management organizations are armed with faster, more accurate weather data.