Home » Insights » THE EFFECT OF CLIMATE CHANGE ON WEATHER

Feeling rather hot? Maybe you’re in need of rain, or you’ve received too much. What feels like weather-whiplash is unfolding across the globe. Unfortunately, severe weather is not only an inconvenience, but also often causes major disasters with major financial losses and, more importantly, even death. 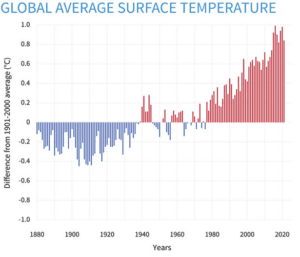 The yearly increases in temperature may seem small, but it is driving a much greater impact. The increase in temperature allows the atmosphere to hold more water. Alongside evaporation from melting polar ice caps, global water vapor has increased. “A warmer climate creates an atmosphere that can collect, retain, and unleash more water, changing weather patterns in such a way that wet areas become wetter and dry areas drier,” (nrdc.org). In other words, not only is there more water vapor for the atmosphere to manage, the way in which the atmosphere retains and then releases the water vapor is more erratic and extreme – causing equally erratic and extreme weather events to occur more frequently.

This change should be of no surprise. The number of weather-related disasters has increased by 500% between 1970 and 2019 (public.wmo.int). Severe weather events such as heatwaves, heavy rainfall, drought, wildfires, hurricanes, and tornadoes are happening more frequently, lasting longer, and are becoming more extreme. In preindustrial times a heatwave had a 1 in 50 chance of happening, but now a heatwave is almost five times more likely to happen and will be 1.2 Celcius or about 34 degrees Fahrenheit hotter, per an Intergovernmental Panel on Climate Change (IPCC) report.

These extreme events are dangerous on their own, and made much worse when they happen in tandem. In 2021 a record-breaking heatwave hit in the southwestern United States at the same time as an unusually severe drought. A Johns Hopkins Study confirmed that these two events interacted to increase temperatures even more and likely led to the dangerous New Mexico wildfires. “As climate change advances, these one-two weather punches, called cascades, and their inherent hazards will become increasingly common,” (hub.jhu.edu).

According to the National Oceanic and Atmospheric Administration (NOAA), last year there were 20 weather and climate disaster events in the United States. Each individually caused at least $1 billion in losses or more. “Disasters in 2021 had a staggering total price tag of $145 billion—and that’s an underestimate because it excludes health damages,” says Vijay Limaye, senior scientist at NRDC (nrdc.org). At one point or another all of us have been impacted by these weather events. Each type of event can have several forms of consequences that we can only expect to increase as climate change worsens.

Dry periods can result in a lot more than just parched gardens. “Drought conditions jeopardize access to clean drinking water, fuel out-of-control wildfires, and result in dust storms, extreme heat events, and flash flooding in the States,” (nrdc.org). But too much water can also be a huge problem “… heavier rains cause streams, rivers, and lakes to overflow, which damages life and property, contaminates drinking water, creates hazardous-material spills, and promotes mold infestation and unhealthy air,” (nrdc.org). The impacts can even be dire. “In the past 20 years there have been 157,000 deaths from 34 heatwaves, according to data from the EMDAT disaster database,” (theguardian.com). Around the world, lack of water is a leading cause of death and serious disease and is contributing to crop failure.

There is a plethora of severe weather to be considered. With more extreme temperatures come more extreme energy demand, putting a strain on our electrical grid leading to potential grid failure and increasing our energy bills. When trying to make decisions, whether as an individual, community or organization, there may be less confidence if long term weather is a factor. Unpredictable weather can make planting crops, purchasing assets, and building infrastructure riskier.

Across both the public and private sector, increased weather volatility is becoming a more prevalent issue. Governments often manage disaster preparation and responses. In the United States this occurs on both the federal (FEMA) and local / regional level. Emergency Management Agencies across the country are tasked with planning for and responding to disasters in their counties and cities. However, with increasingly erratic weather, what may have been an adequate plan and response to a storm or tornado 20 years ago is no longer adequate. “63 percent agree with the statement that ‘State government spending increases to better prepare your state for future weather disasters, even if it requires you to pay higher taxes,’” (thehill.com).

From insurance companies to oil and gas producers, to aviation and grocery stores, companies are impacted by volatile and severe weather. Unpredictable weather poses a risk to product input availability (water / crops), transportation of goods, infrastructure, and employee safety. “From 1970 to 2019, weather, climate and water hazards accounted for… 74% of all reported economic losses,” (public.wmo.int).

Unfortunately, these are issues that will not go away any time soon. In fact, we can only expect them to get worse. “The nine years from 2013 through 2021 rank among the 10 warmest years on record,” (climate.gov). Looking at developing warming temperature trends, climate change will progress more, leading to more unpredictable and damaging severe weather events. While the occurrence of severe weather events is inevitable, governments and businesses can access better data and modeling to optimize their response plans and decrease risk for their stakeholders.